The only woman I want is the one I can never have.

Harper. My best friend's sister. I've wanted her since I was eighteen, but she's always been off-limits. Now I'm home after years in the Marines, and nothing has changed--except everything has. Her brother is dead, and she's on a hopeless quest for answers about his death.

And I want her just as much as ever.

Someone is trying to kill her now, and she won't let me keep her safe. I have to protect her anyway, even if she doesn't trust me, even if she hates me for it. A man protects what's precious to him, whether or not he can ever claim her for his own.

And Harper has always been precious to me.

Protecting His Best Friend's Sister was originally published as Duty Bound. It has since been expanded, revised, and re-edited. 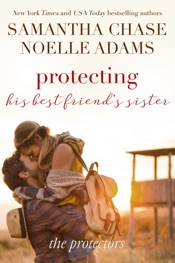